The Saving Righteousness of God (ch. 5) 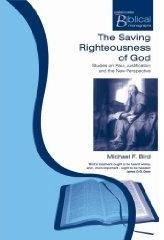 Well, we are almost over the proverbial literary hump; four chapters with four remaining. In this chapter, Bird seeks to appropriate insights from the New Perspective on Paul (hereafter NPP), while showing some of its the weaknesses (89). I believe this debate is (finally) running out of steam, and am excited to see Bird move beyond the NPP.

First, Bird makes a few salient criticisms of the NPP.

(1) Merit Theology - E.P. Sanders and his scholarly progeny have adamantly maintained that Jews in the Second Temple Period were not legalistic. The covenant was the undergirding presupposition in every strand of Judaism, and this covenant was an expression of God's grace. In fact, "getting in" the covenant was solely a matter of divine grace. On the other hand, "staying in" the covenant was via obedience. This obedience, however, was understood by Jews as a grateful response to the covenant. Moreover, Jews could avail themselves of the sacrifical cultus if they failed to meet the covenant stipulations. Sanders's schematization is known as Covenantal Nomism. Bird agrees with Sanders that the Jews were not legalists. However, he criticizes Sanders's imposition of one soteriological construct on all the various strands of Second Temple Judaism. Judaism is diverse, and certain groups within Second Temple Judaism definitely emphasized law-keeping as the means of eschatological vindication. Therefore, when Paul challenges his opponents' emphasis on Torah-righteousness as the basis for final justification, he isn't knocking down strawmen. Second Temple Judaism is simply more diverse than Sanders admits.

(2) Election and Eschatology - Sanders equates election with salvation. This is misleading, since (according to him) "staying in" the covenant is by human obedience. Assuming this to be the case, it is difficult to understand how salvation is a matter of God's grace rather than human achievement. Biblically, salvation has an eschatological focus.

(3) Works of the Law - Dunn and Wright have argued that for Paul, the "works of the law" denote those distinctive Jewish works (e.g. circumcision, sabbath, food laws) which marked Jews out from the surrounding nations. The problem with this interpretation is not in what it affirms but in what it denies. For Paul, the works of the law certainly include those ceremonial rites which demarcated Jews from Gentiles. But said works also encompass everything that the law demands (cf. Rom 3:20; 4:4-6). Therefore, it is reductionistic to say Paul is simply attacking a nationalistic mindset. He is also critiquing the Jews' synergistic understanding of salvation.

Bird makes three additional "smaller" criticisms of the NPP, but you'll have to buy the book to read about those.

Second, Bird notes some helpful insights from the NPP.

(1) The Jewish Context of Theology - NPP advocates have rightfully emphasized the need to understand Paul in the milieu of his day. I laud Sanders, Dunn, and Wright for drawing attention to this. We are quite removed from the world of 1st Century Judaism, and we will impose improper categories onto the text if we do not take the historical context of the New Testament seriously.

(2) The Social Function of the Law - It's easy to view biblical statements about the law in a generalized way. The NPP has reminded us of the boundary-creating effect the law had in Mediterranean antiquity. This has helped me to remember that Paul's aim in talking about the law isn't just vertical (me and God), but horizontal as well (Jew and Gentile).

(3) The Unity of Jews and Gentiles in One Body - The unity of Jewish and Gentile believers is central to Paul's mission. Just read Galatians, Romans 3, or Ephesians 2, and you will see that justification is integrally bound up with the Jew/Gentile issue. In light of this, the question we should ask when reading Paul may not be "what must I do to be saved?", but, "who are the people of God and in what economy will they be vindicated?" (109).

(5) Righteousness and Obedience - The NPP has contended for a link between justification and obedience that is oftentimes lost in Protestant theology.

Well Dr. Bird, I have a few questions...

(1) How much gas do you think is left in the tank of the New Perspective debate? Have most people settled on a mediating position? Will there be a new hot topic in this field of study?

(2) How do you incorporate insights from the NPP into your teaching without losing your congregation (and your own mind!) in the process?
By Anonymous

Jeff,
(1) I think we are about to enter a mediating phase where the best of the NPP will be taken on board and the worst of it excised. Recent volumes by Francis Watson and Robert Jewett lead to me think that we are already here.

(2) I think the best thing we can do to integrate one's findings in preaching and teaching is to demonstrate the social dimension of the issues Paul was facing. You don't have to teach a class or congregation the history of Pauline scholarship for them to be able to get the horizontal elements of Paul's thought on "righteousness". Analogies abound with race, class, nationalism, or anything which divides "them" from "us" in a way that God does not. You can also give people little catch phrases to help them along. For instance, I tell people that what Paul was opposing in Galatians was not a pure legalism, but the view that one had to become a Jew in order to become a Christian. Easy to remember.

Could you flesh out what you mean by "the Jews' synergistic understanding of salvation" What does Dr. Bird say is being synergized with faith? Could say that the problem the Jewish Christians were having was not nationalistic but ethnocentric. Not that people had to be part of the nation, but take on the identity of Judaism to be saved. I think that is where I am. I agree that cutting ergov nomou done to the circumcision and food laws is reductionistic, the keeping of the whole Torah is the foundation of Jewish identity. Yet it seems to me that the way Paul argued against Torah requirements for Gentiles makes it seem like their is an identity function at play. Sorry, to ask for more depth, I am sure Ill get it when I read the book, its next on my NT list after I finish Watson's Paul and Judaism.

Michael,
thanks for the insights. I think the NPP offers much food for thought in regards to the relationship between justification and community life in the church.

Daniel,
(1) good thoughts. By "synergistic," I think Bird is referring to the view espoused by some Second Temple Jews that while divine grace is operative, law observance remains the determining factor for eschatological justification. (Dr. Bird, feel free to comment if I am misrepresenting you). Human effort in law observance works synergistically with God's grace. Obviously, the term "syngeristic" can describe a vast array of soteriological positions. Perhaps scholars are employing the term to articulate a mediating position between covenantal nomism and the view that the Jews were all Pelagians. Timo Eskola, for example, calls the soteriology of Second Temple Judaism,"synergistic nomism."

(2) I think ethnocentrism is part of the problem, but I don't really take issue with those who say that the Jews were nationalistic, so long as we are clear that the sort of nationalism being talked about is dissimilar from Western notions of the concept.

(3) In Galatians especially, I think it's beyond question that Paul discusses the law in its boundary-defining role. The situation that prompts Paul's discussion of justification has to do with boundary markers and ethnic identity. I think the sharp edge of Paul's critique is often against those Jews who are preoccupied with the distinctive, boundary-marking laws of Torah. However, I also think that Paul thought long and hard about justification before facing the issues in Antioch/Galatians/Acts 15. As I read through Romans 5-8, it seems clear to me that Paul understands justification as the solution to all of Adamic humanity's plight. Paul's discussion of justification here relates to basic issues of anthropology, and not the Jew/Gentile controversy. Thus, justification isn't just a strategic doctrine Paul conjured up to outflank his opponentns. It appears Paul had a developed theology of justification that he could apply to various situations.