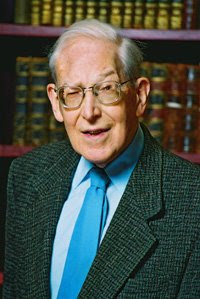 We at Christians in Context have recently had the opportunity to interact with a number of reputable Christian scholars whose work we have long admired, including D. A. Carson, N. T. Wright, J. D. G. Dunn, I. Howard Marshall, and R. C. Sproul. Many of these have emailed us with unsolicited favorable commentary on our work. Yet each scholar's email also included a surprising note. For example, take this letter from J. I. Packer:

I write in appreciation of your blog. It is firmly evangelical, robustly ecumenical, gently Calvinistic, and cautiously post-tribulational pre-millennial. Though I am typically reticent to write reviews and blurbs, I am glad to commend your glowing irenicism, scholarly acumen, and gracious tone. I would be happy to endorse any further work that you produce.

Despite my substantial enthusiasm for your work, I must say that it is difficult to believe that anyone could take you seriously when your first names are so readily accessible. My own name has appeared as 'J. I.' for so long now that even I have forgotten what those initials once stood for, and the gravitas of my work has increased accordingly. I suggest you work towards the same.

While honored by Dr. Packer's kind words, we were utterly confused by the second paragraph. Only after a few such emails came in did we realize however that Packer must be correct: what separates the work of men such as F. F. Bruce, D. A. Carson, and N. T. Wright? It could only be their abbreviated names.

Having now faced the reality that if we are to gain more scholarly momentum we will need to change our names, we hereby shall be posting using the below-listed appellations:

We ask that you no longer refer to any of us by any other names. Thank you for your compliance.

(Just kidding. None of those scholars have emailed us. Just a little nerd humor that needed some embellishing for the joke's sake. We're also not going by any of those names, though if you ask me "N. R. E. Jeune III" does have a nice ring to it...)
By Damian Romano

the real reason you've not (more) successful is actually the result of too many letters. That is, every really successful firm is made up of three major players (at least in name) Every firm that was known by 3-letters was very successful but if they went to 4-letters, disaster. So it is with great sadness that I must advise you to drop one author from the list of credits. Make them a junior partner so they can keep writing. [/end humor]

Very Nice! I have also found it interesting that many scholars have initialed names... here are a few dead guys that might also have written... that is, if they weren't dead: C.S. Lewis, J.R.R. Tolkien, A.W. Tozer, D.L. Moody, A.W. Pink and J.C. Ryle.

Wow. I totally fell for that and my mouth was so wide open it could have touched my desk. Glad to know that was just a joke...sheesh... :)

I wasn't going to do this, but this post requires me to come out from the cover of my nom-de-plume "Bill Faris" (what a joke name that is!) and reveal my true identity as... Hal Lindsey!

And, while I'm at it, let me just say that my supercomputer from the 1980's (an Apple II), can still run cricles around Chuck Smith's Texas Instruments pocket calculator. So there!

O yeah, one more thing: if you take the seventy weeks of Daniel and divide them by the 12 Days of Christmas, then take that sum and stretch it across the pentatonic scale, you get "Jesu, Joy of Man's Desiring" played backwards on a Led Zeppelin record (and also a BIG headache!)