The Saving Righteousness of God (ch. 3) 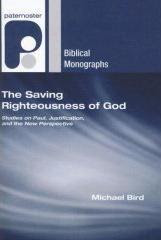 In chapter 3, Bird focuses on the centrality of the resurrection for Paul. He wishes in so doing to offer a corrective to Protestant theologians who have placed an inordinate amount of emphasis on the cross. This isn't to say, of course, that the cross is unimportant to Paul. To the contrary, the cross is at the very heart of the apostle's theology, as it is a fundamental expression of God's saving righteousness (cf. Rom 3:24; 5:9). However, the resurrection is often treated as an add-on to the Christ-event; a proof that Jesus accomplished what he purposed to do at Calvary, and no more. Bird maintains that the resurrection is much more integrally related to God's righteousness and the believer's salvation than has traditionally been supposed. To substantiate this, he examines what impact the resurrection has upon our justification.

Bird begins by surveying five scholars who have argued for an umbilical relationship between Christ's resurrection and our justification. I won't go into detail in outlining these scholars' views, but let me give you a few quotes to get your mental juices churning.

God justifies the sinner because of the new situation of being reconciled and justified which is created by the raising of the Crucified. In this situation, sinful man, in so far as he participates in it through Christ, is qualified as just before God.

(Walter Kunneth, The Theology of the Resurrection, 158)

The legal ground of our justification - and the reason to praise God as the justifier of the wicked lies in Jesus Christ exlusively ... It lies in his death and resurrection, not in his teaching, or in our obedience to it. Man's faith has a part in that legal ground only in as much as it is faith in Jesus Christ.

(Barth and Fletcher, Aquittal by Resurrection, 94)

the enlivening of Christ is judicially declarative not only...in connection with his messianic status as son, his adoption, but also with respect to his (adamic) status as righteous. The constitutive, transforming action of resurrection is specifically forensic in character. It is Christ's justfication.

(Richard Gaffin, The Centrality of the Resurrection, 124)

Just as our sin brought Christ's condemnation and death, so his resurrection announces our justification.

In the second half of the chapter, Bird analyzes those texts where Paul imbues the resurrection with salvific signifcance; viz. 1 Cor 15:17, Rom 1-5, 1 Tim 3:16. There's tons to ponder regarding Bird's exegesis of these passages, so let me just note some of the conspicuously interesting points he makes.

1. Bird thinks that a "Christological" reading of Romans 1:16-17 is worth considering, wherein the righteous one (Jesus) will live (resurrection) by his faith(fulness) (n. 49). If this is indeed what Paul is doing in Romans 1:16-17, it powerfully underscores the representative nature of Christ's work on our behalf.

The retributive justice of God, his verdict so to speak, is discharged in the death of Christ. The wrath of God has been propitiated with such finality and such perfection that none remains on the believer. In the resurrection, God's declaration of vindication and the enactment of it are manifested in the resurrection of Christ.

3. Romans 5:18 is similar to 4:25, wherein Christ's act of righteousness leads to justifying life for all men. The resurrection is everywhere assumed in Romans 5:12-21, since it is the risen Christ who bestows life and righteousness to believing humanity.

4. Bird's exegesis of Romans has also prompted me to rethink Romans 10:9-10. Why does Paul say that if we believe in our hearts that God raised Christ from the dead, we will be saved? Why does he not mention the death of Christ? Isn't that what we are supposed to believe in? Perhaps Paul is assuming what he has argued earlier; namely, that Jesus has been raised for our justification (4:25). Therefore, believing in Jesus' resurrection actualizes our justification...or something like that. All that to say, the verse was always perplexing to me because I never understood the salvific significance of the resurrection.

To conclude the chapter, Bird notes four implications of his study;

1. When justication is located in the death and resurrection of Christ, a tenable connection can be posited between the judidical and pariticipationist categories in Paul's thought.

2. If Bird is correct, he must explain why Paul can speak of justification as occurring through the cross without ever mentioning the resurrection (Rom 3:24; 5:9). He suggests that Paul did this for pastoral reasons, but I'm not as convinced by Bird's argumentation at this point. Bird says that Christ's death constitutes the verdict against sin for justification to proceed (58). Yes, but Paul seems to say more than this in Romans 5:9; he appears to say that Christ's death causes our justificaion. Maybe I'm being nitpicky (in fact I know am, since I really didn't find much of anything to disagree with in this chapter!).

3. Justification is supremely christological. To this I give a hearty amen. I think it's misleading when systematic theologians discuss the atonement/resurrection apart from the order of salvation. Think of the order of salvation as it is generally conceived. It looks something like this (for us Reformed folks at least).

The problem here is that you can look at the above list completely apart from the person and work of Jesus. This is misguided, for it is only through our union with Christ that the benefits of salvation can be mediated to us. Christ is the justified one, alive from the dead. Through union with him, God calls us just, calls us family, calls us holy, and calls us his. God's love for the church is always and forever mediated through the Son. It is unfortunate that the traditional categories of systematic theoloy tend to obfuscate this reality.

4. If justification is to be conceived of as union with the justified Messiah, then what becomes of imputation? We will look at this question next week.

To conclude, I have two questions for Dr. Bird. First, a theological question; when Paul says that we are raised with Christ in Ephesians (e.g. Eph 2:6), do you think this is just another way of saying that we are justified? Second, a pratical question; how should the salvific significance of the resurrection change the way we share the gospel?
By Anonymous

Jeff, good questions again.
(1) I cannot speak too much on Eph. 2.6 since I know Col. 2-3 much better, but I think the basic idea is more on realized eschatology and participation in his life and reign. (2) While it is hard to over emphasize the cross in the gospel, preaching, or discipleship, it is possible to neglect the resurrection. Resurrection is the source of life, hope, and joy for the future. The gospel is not just that we are sinners and God smites Jesus in our stead, but also, that he makes Jesus alive, vindicates him, we share in that life and in that vindication. The ultimate proof of justification is "life", we are not justified unless we are vivified, that's why Paul speaks of life-granting-justification in Rom. 5.

Thanks, that helps. I'm still trying to figure out why Ephesians is almost devoid of righteousness/justification language. I like the idea that life and vindication are the two big things we get from Jesus' resurrection. Seems like it could be really helpful in evangelism.