A Final Review of They Like Jesus But Not the Church 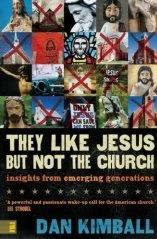 It finally happened: I finished They Like Jesus But Not the Church. Before I leave it behind and move on to the next book, I wanted to give it one final, full review (as opposed to my comments on some of the particulars that have been the themes of my previous posts on the book).

They Like Jesus starts with the premise that modern America is filled with an emergent generation (i.e. 18-30 yr. olds) that is interested in Jesus (and spiritual things more generally) but would never go to church to explore said interest in spirituality. The solution for Christians who want to reach that group with the gospel is to break out of the Christian subculture and make genuine relationships with them. Sincere friendship that includes patient listening and explanations of concepts will lead people into a more legitimate understanding of Jesus that moves past pop-culture perceptions into the full biblical picture.

The middle six chapters each voice the specific concerns emergent non-Christians have: the church is an organized religion with a political agenda, judgmental, male-dominated and female-oppressing, homophobic, arrogantly exclusivist, and narrowly fundamentalist. Included in those chapters are Kimball’s practical answers to each concern. Concluding chapters once again encourage Christians to leave the subculture armed with the hope that comes from knowing that the emergent generation is genuinely interested in Jesus even if for now the church has been slow to reach them.

Kimball has done the church an enormous service with this work. Let me be quite clear: They Like Jesus But Not the Church is a great book that I am convinced many (most?) Christians would benefit greatly from reading.

If you’re skeptical of my high praise, I fully understand. Not only do book reviews tend toward hyperbole in general, but given the constant flow of books everyone is supposed to read on the secret for successful ministry, what could possibly make this one so worth reading? I myself went into the book fully ready to fault Kimball for catering to non-Christian culture, thereby creating a new kind of seeker sensitivity that would marry the culture and generally commit the same old Emergent error of throwing out the biblical baby with evangelicalism’s bathwater. Put another way, I expected that They Like Jesus was going to propose a model of church that would primarily be for non-Christians, when in fact the church is for Christians (who are equipped by the church to go to those non-Christians).

Thing is, while I was ready to find those errors from page one, I never did. Kimball has synthesized some of the best observations of the Emergent church balanced with a refreshing commitment to Biblical authority and Christian orthodoxy. The whole book is designed as a primer on what the emergent generation of non-Christians are thinking specifically as a tool to get Christians to go to them. That is, it rightly does exactly the opposite of what I expected it to fail at, all the while never suggesting that we ought to hide or modify what we believe to make it more acceptable in the eyes of the culture. We’re just supposed to listen sensitively and build relationships with genuine love. And is that so unbiblical?

In point of fact, no book I have ever read has ever encouraged me to take the gospel of Jesus Christ to non-Christians like this one has (which is why I am so convinced that many Christians would benefit so much from it). Much of that is because Kimball writes from a uniquely well-rounded perspective. He was raised a non-Christian, only to slip subconsciously into the Christian subculture, only to be awakened to the reality that he is ineffective in bringing the gospel to the world, only to build trusting relationships with non-Christians all around him. Further, he has thought through all of those sensitive and controversial issues that the emergent generation openly has problems with.

All of this comes together to mean that Kimball not only identifies the problems, but gives well thought out and exceptionally practical solutions for how to deal with all of them- something like a field guide for meeting with emergent non-Christians. That is probably much of why I feel so much better equipped to share the gospel.

The one major critique of the work is that the writing is frankly poor. Kimball often writes at a roughly high school stylistic level which can make the whole project feel simplistic. But neither his clarity nor his ideas themselves suffer much because of it, which is again a good indication that he has thought through the issues. So while the style is often frustrating, it does not hinder the thinking enough to be a major deterrent. It just meant that every so often I had to rant about it to a friend, which isn’t so bad.

Many of you who are like me are realizing that, even if it isn’t entirely true that the American church isn’t meeting emergent non-Christians (the jury is still out on that question for me), it is true that I am not. If you are frustrated to be experiencing that same reality, They Like Jesus But Not the Church is well worth the read- even if it never means you get as cool of a haircut or listen to as cool of music as Dan Kimball.
By Andrew Faris

Email ThisBlogThis!Share to TwitterShare to FacebookShare to Pinterest
Labels: Dan Kimball, emergent, They Like Jesus but Not the Church

I haven't read this book yet, but it sounds like the author is reaching similar conclusions as David Kinnaman did with his research in unChristian. Do you think that is a fair assessment? I found that book to be very convicting in present behavioral patterns within the church.

I haven't read Kinnaman, so I can't make any comment on that (frankly never even heard of it- maybe I'm out of the loop).

My name is Matt Gargula said...

faris, read unchristian too. its similar, but different i am sure.

Good final review. I am almost done. I love it. And I too, have been very motivated to take the gospel to non-Christians. I have even begun to spark up all my old relationships with non-Christians that I kept around until I fell fully into the Christian bubble when I came on staff as a youth intern at my church. Now that I have made my way full circle back to being on staff at a church, I figure NOW is the time for change.

Thanks for the input, I will have to read this book (at least put it on a growing to read list). unChristian is dry, but it has a lot of research to back up the findings, so it will be helpful talking with people who need data to be convinced.

"Watch out for false prophets. They come to you in sheep's clothing, but inwardly they are ferocious wolves. By their fruit you will recognise them. Do people pick grapes from thornbushes, or figs from thistles? Likewise every good tree bears good fruit, but a bad tree bears bad fruit. A good tree cannot bear bad fruit, and a bad tree cannot bear good fruit. Every tree that does not bear good fruit is cut down and thrown into the fire. Thus, by their fruit you will recognise them (Matt 7:15-20).

The Churches have produced many false prophets. At first they appear to be credible. However if they are allowed access to the flock, they can do incredible damage.

The following are the proof: