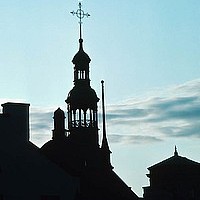 Thanks to the wonderful invention of google alerts, I was recently notified of an interesting article by John Hammett from Southeastern Baptist Theological Seminary called An Ecclesiological Assessment of the Emergent Church Movement. As the title suggests, the essay sets out to discuss how the emergent community impacts (or defines) the doctrine of the church. Therefore I figured I'd share a little of Dr. Hammett's appraisal and offer some comments along with it.

At the outset of the paper Hammett begins with a definition of the Emerging Church Movement. He cites the difficulty in defining the group due to its diversity, facets, and nuances. He notes, "The leaders of this movement acknowledge that there is neither unanimity nor even a consensus of opinion among them as to what emergent is, and they deny that any single theologian or spokesperson represents the movement as a whole." But what he does state that the most common theme that surfaces in the over arching dicussions is postmodernism. Though even this has been challanged by individuals such as Andrew Jones, much of the concern is in fact in relation to post-modernism.

Hammett then goes on to ask two questions based on the emerging premise:

1) Must all churches respond to Postmodernism?

2) Should churches respond to Postmodernism?

After giving numerous examples as to the importance of reaching the culture and "learning the vernacular" (to minister to postmodern people; Kimball), he concludes the notion in #1 as problematic. He says, "To insist that all churches must change their methods and message in the light of postmodern culture to reach the next generation seems simply to be an inaccurate overstatement." Hammett's reasoning is shaped from four areas, 1) not all [geographical] areas are affected by postmodernism, 2) even within the areas that are strongly affected by postmodernism, those outside of the emergent community are effectively reaching the culture (ex. Dever, Capitol Hill Baptist Church), 3) study have shown that parents are continuing to be the major [religious] influence in the lives of their children, 4) postmodernism as we know it is showing signs toward declination.

For the second question Hammett votes in favor. He says, "Of course they should, in some sense. Love for our neighbors calls us to learn the language and engage the questions of the culture." To this he adds a comment from D. A. Carson, "The Reformation developed around concerns that the Catholic Church of that time had departed from Scripture in a number of significant ways; thus, the changes advocated by the Reformers were attempts to reform the church on the basis of Scripture." Although he does caution us of the following, "Should churches adjust their methods and message to postmodern culture? To do so runs the risk of becoming culture driven, rather than Scripture driven. Any adjustments to postmodern culture must be preceded by a biblical analysis of postmodern culture that identifies at which points we may take a Christ of culture or a Christ transforming culture position, and at which points we must take a Christ against culture posture."

Hammett concludes by rightly noting that the church always faces the twin dangers of cultural captivity and cultural irrelevance. And though he does give credence to the emergent community for attempting to reach the culture, he offers the following assessment: "...The emerging church itself also runs the risk of being captive to culture, only to postmodern culture. The more desirable alternative is for all churches to engage the culture, with a zeal to understand its questions and to speak its language, but also with a resolute willingness to take the posture of Christ against culture where biblical fidelity requires it. "

After reading the entire article I found many of Hammett's arguments to be quite compelling; particularly with regard to his point that the Emergent Movement risks finding itself captive to postmodern culture. It is often difficult to discern the degree to which we can alter our methods without compromising our message. And we certainly don't want to alter it in such a way that, while becoming "relevant" to those generations most directly influenced by postmodernism, we inadvertently make ourselves irrelevant to the rest of the population. But I do personally sympathize with the emergent community. Am I convinced that there is a definitive way in which church should be performed? No, but I am confident that we can reach the culture in multiple ways with our greatest concern being to proclaiming the good news of Christ.

As a postscript, I wanted to note that I have reached out to Dr. Hammett in an effort to gain some further insight into this issue. He has graciously given me an article from the manuscript of an upcoming book on the Emergent Church Movement where he discusses this topic in greater length. He has also agreed to respond a correspondence interview as well. Perhaps some of our readers might offer some thoughts on this issue in order to inform the interview questions I ask of Dr. Hammett. Look for that in a few weeks.
By Damian Romano

Tough to nail down this whole Emergent thing, but can't argue that its a "thing." I've also posted today on the issue of emergent ecclesiology, but more as suggestion than analysis. Thought you might be interested.

Grace and Peace,
Parables of a Prodigal World

My suggestion, to those who are truly orthodox and who embrace Truth and who seek to serve the Lord in full submission and humility: spend some time living--as I have--in a truly pagan and postmodern environment for a while (i.e. graduate school in a discipline within the liberal arts at a secular university)...then see just how "sympathetic" or accomodating you'd be in trying to find the "good bits" of this ism or the emergent church movement.

When you spend some time within the "real deal," as it were, among the outspoken atheists, radical feminists, and other haters of God (unlike the wannabe pagans among the emergent set who grew up in the church perhaps and/or who attended a liberal Christian college), then you really get a chance to see the spirit of the age alive and well within the primary characteristic of postmodernism: rebellion.

Of course, you have read Carson and he has aptly identified this characteristic as well. Thinking about it further, what single characteristic of Satan's plethora of foul sins could best be attributed to him? Rebellion. It has become so tiresome for me to see and hear so many well-intentioned, orthodox, and/or true believers attempting to accomodate the emerging heresy that abounds today, following the same protocol one might apply to a roundtable discussion among believers over some peripheral doctrine to which all present might very well end in brotherly disagreement. Not so with this movement. This is an attempt to marry--in the most unholy union--Christianity and sheer paganism. Spend some time at a place like the "ooze" website and read the rebellion and downright blasphemy that "emerges" in so many articles.

If you've had the (unfortunate) experience, like I have, of wasting valuable time and money in graduate school at a secular university within a discipline such as English Literature, then you see the parallels btween the postmodern spirit of the age (authored by Satan himself) that dominates such an environment through literary and social theory and so much that we see in the emergent church movement. If you are involved in teaching, particularly within secular higher education, then you are all too familiar with just how identical the rhetoric and strategies and BELIEFS of this movement are with all of that pagan-inspired, liberal mumbo-jumbo (regarding the "need to change" and/or adapt to postmodernism) you've been forced to hear at teaching conferences in your profession.

As any observer of the current state of higher education (combined with the values among students today) can attest, postmodernism has essentially trashed this once-Christian enterprise. The next target on the postmodern agenda is the institution of the church, and with such accomodation and sympathy among those who ought to be watchful shepherds...well, it just won't be very surprising when our churches become mirror images of the average secular college campus...complete with accomodation of all it's postmodern "isms" as well.