The Best Christian Band You Don't Listen To 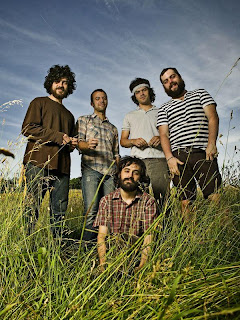 All those who listen to mewithoutYou knew who I was talking about before they read this sentence or looked at the picture. That’s because they already know what I have discovered is true: mewithoutYou is unquestionably the greatest Christian rock band of all time.

OK, so that might be a bit of overstatement, but I do really love them. Hailing from Philadelphia, mewithoutYou is that oh so common blend of hardcore, indie rock, and screamed spoken word, sort of like Sunny Day Real Estate meets The Refused meets Bradley Hathaway. You know the type…

Well maybe you don’t. In fact it is their abrasive style that keeps them inaccessible to many. It would be unfair for me to plug their lyrical content (as I most certainly will below) without forewarning you that, while mewithoutYou are masters of indie rock dynamic, they take a little getting used to. I don’t know many who loved them the first time they heard them (except of course for my Dad, who has a cooler taste in music than most college students).

MewithoutYou’s energy is fierce, but is not for its own sake. Aside from their idiosyncratic melodic style, what separates this band is the way musical adrenaline pushes lyrical content deserving of that force. The drumming and guitar work avoids the temptation to showiness but still drives the catchy yet dissident vocals. That is, the musical energy is of a different quality than, say, Muse on the new metal side or the Foo Fighters on the semi-hard rock side.

What really hooked me is the vocal performance, both lyrically and melodically. Not only do I now love the screamed spoken word, but I am frankly hard-pressed to find a better Christian rock lyricist than Aaron Weiss. Note some of the following samples:

From “A Glass Can Only Spill What it Contains” on Brother, Sister: 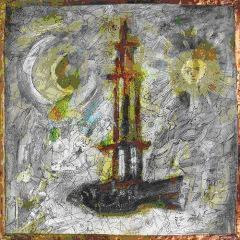 What new mystery is this???
What blessed backwardness!
The Immeasurable One is held but does not resist-
Struck down by wicked words and foolish fists of senseless men,
The Almighty One does not defend!

“A Glass Can Only Spill What it Contains” as a whole explores the foolishness of the human tendency to think ourselves autonomous when in fact we exist underneath God’s sovereignty, felt or not. When left to our own devices we send the Lord to the cross- a heinous display of what freedom we do exercise. Of course, at any point God could have resisted the cross but chose to do otherwise, revealing that not only do we not actually have autonomy (the whole of this could have been stopped at any point) but that when we exercise our presumed freedom we betray the embodiment of all beauty, goodness, and love.


From “Torches Together” on Catch For us the Foxes: 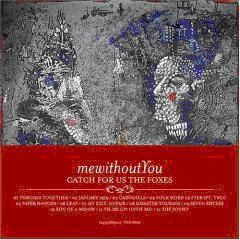 Why burn poor and lonely under a bowl or under a lampshade
Or on the shelf beside the bed
Where at night you lay turning like a door on its hinges First on your left side, then on your right side...
then your left side again?
Why burn poor and lonely?
Tell all the stones we're gonna make a building...
We'll be cut into shape and set into place
Or if you'd rather be a window,
I'll gladly be the frame,
Reflecting any kind words, we'll let in all the blame
And ruin our reputations all the same.
So never mind our plan making- we'll start living!
Anyway aren't you unbearably sad?
Then why burn so poor and lonely?

This time the theme is, simply put, evangelism. But rather than stopping at the simple need to share the gospel, Weiss wrestles with the apparent contradiction of our own limitedness as both sinful and as individuals and the mandate to be God’s witnesses in a sinful word. The living stones should form a whole building, and the torches should be in community since we do not burn bright enough alone.

I go back and forth on my favorite mewithoutYou song, but my last example below might win. In “Four-Word Letter, Pt. 2” from Catch For us the Foxes, Weiss borrows the lyrics from the old spiritual popularized in the Cohen brothers’ film O Brother, Where Art Thou? Here are Weiss’s two choruses:

In O Brother, The “let’s go down” call draws two entranced characters to be semi-mindlessly pulled to a river and be baptized. While I enjoy that scene in the movie and the lyrics in the gospel spiritual on their own, Weiss reinvigorates them with his screaming call. The unique vocal style adds urgency to the gospel call that has moved me to tears on numerous listens, as if everything inside Weiss bursts forth as he passionately begs.

Yet Weiss does not allow the characters he calls to in the song to enter that trance. Instead, that audience (at points his own family, which brings a painful personalness as the listener feels their resistance) responds with what actually seem to be appropriate doubts. Weiss hears the doubts and responds with equal passion. Weiss’s screaming uniquely conveys the deep compassion so appropriate to the weight of the sinfulness of humanity and God’s loving response of the gospel.

It is indeed that emotional weight that brings me back over and over to mewithoutYou. When I find myself mired in dryness and dispassion, mewithoutYou awakens my heart. I am convinced this is one of the great reasons Christians need to make great music: reading, talking, and listening to sermons cannot express and draw out emotion like music can. MewithoutYou accomplishes this goal brilliantly, with more musical and lyrical thoughtfulness and creativity than almost all of the music I hear Christians producing. So here’s hoping that you can past the abrasiveness and enjoy them equally.
By Andrew Faris

As a veteran of the Jesus Music scene, I can't understand how you can get so excited about those lyrics when we had (back in the day) TRULY great lyrics from the likes of Phil Keaggy: "Now you're nobody's play girl now..."; Paul Clark: "Like socks, one size fits all..." and the like?

Anyhow, I did like what you said about how cool your Dad was.

They are the best. The only group that compares is the Psalters or Showbread, but the Psalters are down to just too people.

As far as I know they are the only band besides switch foot to appropriate Kierkegaardian thoughts into their songs. (see Soren's Song by Switchfoot and Leaf by mwY)

They also put on a wonderful life show.

Their lyrics pretty amazing too, they remind me of T.S. Eliot, but with more guitar. How could you not like this stuff:
"If I was Samson I'd have found that Harlot's blade and cut my own hair short"