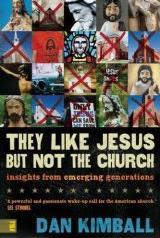 Sorry Dan Kimball, the game is up: you're just not really Emergent, even if you do dress cool, have a church in Santa Cruz, and like cooler music than most of us.

As if Kimball's confession of all of his orthodox theological views wasn't enough (see They Like Jesus, 56) , he actually defends apologetics. I'm actually more interested in those thoughts than in proving that he isn't Emergent, so check out this quote:

"As we talked, I also ended up using classical apologetics. Some people think apologetics isn't useful today, but I think it still is, though only after trust has been built and we have been asked questions. In my experience, even those who grew up outside of the church in our emerging culture consider having reasonable answers a respectable thing. In fact, people want to know there's validity to what I believe, and apologetics has been helpful to me in showing that to them. I believe we need apologetics more than ever today, but we need to know what the current questions are." (183)

Some of the dissenters Kimball mentions are friends of mine who are good theological thinkers. My discussions with these folks have made me rethink the value that I have placed on apologetics for the last six or so years. Add to that the two further self-realizations that (1) I often like apologetics because I like being right more than I actually care that non-Christians come to know Jesus (pretty convicting...) and (2) that I have never convinced anyone by means of apologetics to give his life to Christ. So while I haven't rejected the enterprise wholesale, my skepticism has increased.

On the other hand, there seems to be something entirely reasonable about apologetics. The theological objections that we have married the spirit of the age (i.e. modernism and the scientific method), that sin has so depraved humanity that the unsaved mind is incapable of grasping that truth (i.e. a strong belief in noetic sin), or that natural theology is a lost cause because true theology must be revealed have not convinced me entirely. Further, apologetics has been indispensable in my evangelism to Mormons, not to mention the testimony of my friend and co-blogger Norman Jeune, for whom apologetics played a significant role in conversion. Even more simply, I do wonder what those anti-apologetics folks do when a non-Christian asks them rational questions.

This has left me treading aimlessly in the mysterious waters of evangelism methodology. At least, that is, until Dan Kimball put apologetics in its place. He basically makes two points: (1) apologetics should be employed in the context of relationship, and (2) apologetics should seek to answer only the relevant questions.

Point #1 makes enormous sense at least on experiential grounds. Not only have I never convinced anyone of the rationality of Christianity by using apologetics, but I also don't know that I have ever used apologetics much past a first interaction with a non-Christian. First-conversation apologetics comes off as a personal attack that is somehow aggressively defensive- like we're hiding something but trying to get people to believe before they find out what it is.

On the flip side, Norm would tell you that while a Christian did need to answer his questions, those questions were answered in the context of relationships that, upon further reflection, he realized were even more convincing. Kimball is convinced that people are generally rational and want answers to their questions, and I think he is right. But they do not want to be targets for our apologetic missiles. And that makes sense, doesn't it? Who doesn't want genuine relationship over a quick attempt at a mind change? And how can such a quick attempt ever be felt as truly loving and not mercenary?

Does God use street witnessing to change people lives? Yes, of course He does. But the fact that God does not make us do everything perfectly before He uses us isn't license for carelessness and thoughtlessness in our approach to being His ambassadors.

Point #2 (i.e. that apologetics should be used to answer people's actual questions, not just the ones that we think they probably have) is equally important. Kimball pens a good challenge to how we frame our apologetics training: "In all of the times I have taken people through this process, I have never once had someone say, 'This doesn't matter. Everything is relative and they can all be right.'...Despite what you may hear about our relativistic world and the impact of postmodernism, when you logically and gently lay the facts out for people, there's not too much arguing. People see the contradiction..." (181-2)

Not only is there the initial point that we probably don't need to worry so much about proving that truth isn't relative (which is the framework or at least entry point of almost all of the apologetics training I am familiar with), but the underlying principle that we need to answer people's actual questions (the "all roads lead to God" supposition, for example, is much more common, and Kimball spends an excellent chapter on it).

Maybe if we started forming genuine friendships with non-Christians, praying for them, and patiently answering their legitimate questions within that relational context, the value of the apologetics tree would become obvious from its fruit.
By Andrew Faris

Email ThisBlogThis!Share to TwitterShare to FacebookShare to Pinterest
Labels: apologetics, Dan Kimball, They Like Jesus but Not the Church

I haven't read the book and I don't have any proper training in actual apologetics (even though I seem to have a natural leaning towards it) But I've always considered apologetics not in terms of a conversion tool but simply a removal of obstacles that keep people from seeing the truth.

I don't expect non-christians to agree with me or believe because of my 'argument'. I simply want them to disagree with what scripture actually says on a given subject rather than what they think it says.

That said, this is one of many books I want to read next.

I am definitely one for personal relationships with non-believers (and I love Kimball's encouragement to make and sustain those relationships!), but I am also convinced that God can work through random spurts of apologetical (sp) conversations. I have no idea if that's a word... ;)

I just went street witnessing last night with my church. Awkward? Yes. Do I look kind of crazy? Yes. But I don't know how to explain it...the Spirit of God moves, and leads, and directs, and opens up the hearts of those people I talk too. It's amazing, and I believe that it is fruitful (even if they don't give their life to the Lord right there). And what do I lean on (besides the Lord of course...)...all of my training in apologetics...I couldn't do it without it.