The Saving Righteousness of God (chapter 1) 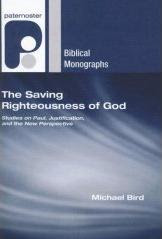 In chapter 1, Bird introduces the burden of his project, and provides an enlightening autobiographical account of his own journey studying Paul. For the past 25 years or so, scholars have been divided on the issue of justification. Here's an oversimplification that helps clarify the debate; proponents of the old perspective on Paul have (along with Luther and Calvin) emphasized the individual and vertical dimensions of justification, while proponents of the New Perspective (e.g. Wright and Dunn) have emphasized its horizontal and corporate dimensions. Whereas the old perspectivites think justification pertains primarily to one's standing in the divine lawcourt, New Perspectivites think it has more to do with how people are marked out as members of the church. Bird appreciates the contributions of both perspectives, and contends for rapprochement;

The burden of this project is to demonstrate that reformed and "new" readings of Paul are indispensable to attaining a full understanding of Paul's soteriology... The vertical and horizontal aspects [of justification] need to be appropriately described and weighted in order to provide a holistic rendering of justification in Paul's letters. (p. 1)

For the remainder of the chapter, Bird describes his own Pauline pilgrimage, noting how interaction with university teachers and Pauline scholars (e.g. Richard Gaffin, Mark Seidfrid, D.A. Carson, N.T. Wright, and others) has shaped his view of justification. At present, he values the contributions of the New Perspective, but believes its advocates fail to appreciate some of the insights of the Reformers (cf. p. 3). Additionally, he thinks that the tone from the Reformed side has not always been charitable to New Perspective supporters, not least N.T. Wright. He thus offers (in the words of Scot McKnight), a peace plan. Collectively, the articles in this book contend for the legitimacy of old and new readings of Paul, and urge for a change in the rhetoric of the debate.

I'm interested to see whether the plan is a success. Furthermore, since this chapter summarizes what's to come in the book, I don't have a whole lot to comment on. However, I have a few questions for Michael.

(1) The literature on Paul is seemingly endless. Where should one start? What books have you found to be helpful?

(2) Who is the book geared for, and why should they read it?
By Anonymous

Jeff, to answer your questions:

(1) As for where to start, it depends on what you're planning on heading towards. (a) For those who want do Paul is mega way, I think the best place to start modern Pauline studies is with F.C. Baur, then move into W. Wrede, A. Schweitzer, W.D. Davies, M. Barth, K. Stendahl, E.P. Sanders, James Dunn, N.T. Wright, T. Schreiner, F. Thielman, D.A. Carson, and Bob Jewett. (b) For an intermediate route I'd probably start with Witherington's "The Paul Quest" and move on to Pauline theologies by Dunn and Schreiner. (c) For the beginners who want an immediate orientation to the New Perspective then I strongly recommend the helpful little booklet by Michael Thompson of Cambridge Uni.

(2) Who is the book for? Primarily for evangelicals who are wrestling with the Reformed vs. NPP thing (although I hope that it gets some wider attention than that and so far book reviews and citations indicate that it's being well-received). The reason why I think my book "works" is because it shows that one can embrace the best insights of the NPP (i.e. justification actually DOES have something to do with legitimating the identity of Gentiles within the church), but without abandoning the essential sola gratia architecture of the Reformed tradition. What is more, it shows that it is possible to make a balanced, informed, and irenic critique of the NPP but without resorting to gross distortions and unkind accusations (in fact Jimmy Dunn and Tom Wright have both thanked me for taking such an approach).

Thanks for the succinct answer to my unhelpfully general question.
I haven't checked out that Michael Thompson book yet, but it sounds impressive. Anyone who writes a "short" introduction to the New Perspective has achieved something quite extraordinary!