Nearly 2000 years ago the Apostle John wrote the apocalyptic writing we know as the book of Revelation. This book has been the center of theological controversy for nearly two millennia. The interpretive difficulty of this writing has spawned a plethora of biblical doctrines to unfold. Perhaps the most controversial section of these writings has been chapter 20.

Well, I'm delighted to say that after all this time it has finally become clear as to what the meaning of part of this chapter really is. Let us observe together by evaluating a few verses, namely 7-10.

In chapter 7 we read, And when the thousand years are ended, Satan will be released from his prison. The thousand years here is clearly metaphorical. What John is saying here is not a literal thousand years, but rather only a few years. To be more specific, he is really only speaking of a period of 4 years, bare with me on this. As far as who Satan represents, well, because John is speaking in metaphors, he is not speaking about the spiritual nemesis of God. Rather he is speaking of the long awaited entity knows as the Los Angeles Lakers. The four years represents the period of time from 2004 to the present, 2008.

Now that we have the major players in the apocalyptic vision, lets move on and properly interpret the following verses.

Verse 8 tell us that after "Satan" (Lakers) has been released from prison (western conference), they will come out to deceive the nations that are at the four corners of the earth, Gog and Magog, to gather them for battle; their number is like the sand of the sea. Statistics will tell you that Kobe and his entorage have increased their fan base nearly 10 fold during this season with the acquisition of Pao Gasol. With the addition of Gasol, that give the Lakers a footprint in all four corners of the "earth" (actually, Europe). Observe: Spain (Gasol), Italy (Brant), Slovania (Vujacic), and France (Turiaf). With that we're told that they will gather for battle. This is clearly a representation to the 2008 NBA finals. Lets move on...

Verse 9 says, and they marched up over the broad plain of the earth and surrounded the camp of the saints and the beloved city. The "they" represent Laker fans as they march to the broad plain of the "earth" and surround what has become clear to us as the TD Banknorth Garden, in the "beloved city", Boston. The verse then tell us, but fire came down from heaven and consumed them. This clearly represents the GARGANTUAN defeat from last night, does it not?

Observe the picture below for the exact representation of this. 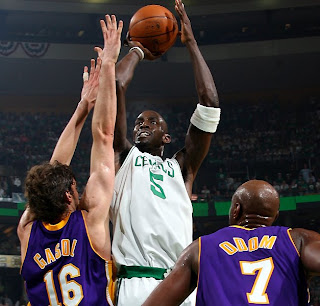 Finally, verse 10 tell us the following, and the devil who had deceived them was thrown into the lake of fire and sulfur where the beast and the false prophet were, and they will be tormented day and night forever and ever.

Unfortunately verse 10 has yet to be fulfilled, so far as history can tell. But I take great comfort in the promises of God, knowing when His word goes forth, it will accomplish that what He purposes.

I hope you all find the humor in this.

You should write a book series.

Oh puhlease. Not a celtic fan? You..sort of... sound like one.

Well, it wouldn't make any sense I inserted the Suns instead of the Celtics. :)