Dan Kimball and the Challenge to Christian Subculture 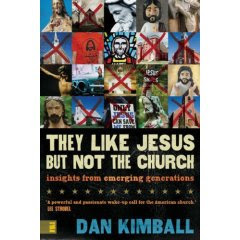 I went into reading Dan Kimball's The Like Jesus but Not the Church without the intention of blogging all the way through it, and that still is not my intention. That said, I finally got around to reading the second chapter and I am rather too convicted to not write anything about it.

Here is what I am taking away immediately: Dan Kimball is on to something, and that something is more important than most of us realize (and by "most of us," I think that I mean we Reformed types who are too quick to write off Kimball because he is labeled "Emergent"). To this point in the book, he has framed that "something" as the problem of a Christian subculture that sucks all of us into it. And even I, a steadfast opponent of most Christian music, Christian radio, Christian clothing, and all the other Christian crap you get at "Christian stores" (as opposed to Christian book stores), have been so sucked in.

Allow me to ask you a blunt question, dear reader: why don't you share the gospel with non-believers?

Of course there are a number of you to whom that question will not in fact apply because you regularly share your faith. But if statistics hold true (which they usually do!), the majority of us spend almost all of our time with other Christians, fail to make relationships with non-Christians, and generally are unfruitful in terms of evangelism. How is it that we can have such a supposed high view of Jesus but not go to the effort to invite others into relationship with him?

That effort, according to Kimball, is simply reorganizing our lives in such a way that we stop spending all of our time with other Christians. His primary test for this is to ask who you socialize with. The convicting truth is that almost every social gathering that I am a part of is with all Christians. Like I said, I have been sucked into the Christian bubble despite having never purchased a "'Tis So Sweet to Trust in Jesus Chocolate Bar."

It really is simple: we Christians need to stop making church into a social club so that it can instead be the launching point for God's mission in the world, namely the discipleship of all people to Jesus. For Kimball this means, at the very least, writing his sermons in a coffee shop instead of in his office. Pretty simple, but from what I understand, pretty effective (although I am curious to hear more about the development of these relationships). And to be sure, that is not all Kimball does to get into the non-Christian world.

The point is this: we take far too lightly the problem that we Christians tend to spend almost all of our time with other Christians. How can we expect to see the gospel go forward in the world if this is the case?

Maybe all these people who like Jesus but not the church have gotten the wrong idea from the outspokenness of Christian leaders who many of us would distance ourselves from. Maybe all they hear about is the way the religious right are the anti-gay war mongers who seat Republican presidents. Maybe they drive around and see weird Christian bumper stickers with weird Christian lingo on them (What is a "rapture" and why would that guy not want his car in case of it?). Maybe their perceptions of Christians (and thus of Christ) are actually not quite right.

But what have you and I done to make them think otherwise?
By Andrew Faris

Email ThisBlogThis!Share to TwitterShare to FacebookShare to Pinterest
Labels: Dan Kimball, emergent, They Like Jesus but Not the Church

You know what I always think about when it comes to this, is the fact that Christians hang out with each other all the time for such reasons as: (1) Not wanting to be "stumbled" by unbelievers, (2) Needing the encouragement from other Christians to live their daily lives, and (3) Not wanting to stumble unbelievers by their own actions.

Now, why I would agree that we do need to surround ourselves with strong Christians for accountability and solid friendships, we become too comfortable in this situation. What does this equal oftentimes? It equals weak Christians. Luckily, I can look inside my close group of Christian friends and know that they would be able to handle an environment where they were the one Christian, witnessing to unbelievers. But for the most part, in my experience of meeting people at a Christian college and in the church, Christians want to keep themselves in their bubble to protect themselves, and even worse, if Christians get out among the unbelievers, they are not an example of Christ, they just give in to all the temptations of the world.

I really want to read that book. Hopefully it is convicting to Christians in the area that they need to step up, be strong with the power of the Holy Spirit, and be a light to this world by bringing people the gospel.

Pray for us, as our church is starting Street Witnessing in two weeks. Yes, this may not be the most effective way of sharing the gospel, but we have to get our church out of their bubble.

i love your question Andrew, " why don't you share the gospel with non-believers?".

i think i know the answers / excuses: because were scared of the outside world. because they are out to get us. because we may be in the world - but were sure not of it! because weve forgotten how normal people socialize. because we don't have anything in common. but i can't tell you how good it is to have those relationships. to learn to talk again (e.g. spiritually) without the jargon. to discover that the world *is* spiritually sensitive - and have real questions - and is seeking.

when i was on staff at the local megachurch - i had no non-christian relationships. it was a very very dry time for me. since i've left full time church employment - my ability to minister and have an impact on churches, non-christians, christians, the arts, and other things that matter to me - like talking about the moral center of industry or culture or foreign policy - have never been higher. i have street cred to talk because i'm talking from inside - not from outside, or from the stage/pulpit.

one of the things that my current community common table has done, is - we have only brought staff on part time. so, we limit the oppourtunity of professional christians to be able to live in that bubble at all. this sorta of forces the issue of part time employment - and the rubbing of shoulders with normal people. five years in - its been a great translation of this value.

although.... as much as your question "what have you and I done to make them think otherwise?" is compelling at the personal level - i wonder if we could respond to that at the corporate level as well.

we try to be intentional to not have something going on at church every day of the week (this fits in well with our business model of not owning a building) which again, would pull us (and our money!) away from normal relationships back into the bubble. our community stays tight by having "barn raisings" at each others homes - where we do any kind of home maintenance work necessary and generally make a working party of out it - and by open email groups, church teams, and blogs. but we also focuss outwardly into those personal non-christian relationships we each have by *not* meeting at our normal place of worship on the last sunday of the month - and instead we do "service worship' - usually involving some kind of labor - in support of some need folks might have. by doing these "service worship" meetings - we call our own bluff.

granted - we started over from the beginning - rethinking church - but - you gotta do what you gotta do. don't let system dictate practice.

That's interesting what you have said.
It brought me back to a time where I worked part-time at my church, and part-time at the emergency room as an EMT. This was a very fruitful time in my life. Not only was I able to share the gospel with so many people, but I was also able to help my church family with various medical things when they came into the ER (which happened to happen a lot during that time).

Thanks for this challenge:

...dear reader: why don't you share the gospel with non-believers?

Your question is blunt, but very important. Most of my time is spent with believers, and that also seems to be the case for many believers I know, as you assert.

(Of course, the thing is I love spending time with believers, which is a sign we are in the same family, but we can't be ingrown and keep to ourselves. Jesus was part of the perfect family, the perfect community, the Trinity, but He was sent out and He sends us out in the same way.)

I know I need to keep praying that God would give me a greater heart for the lost and the Spirit would lead me out to the highways and by-ways. I do know that God will honor that prayer and shake me up and push me out of the nest. But like the disciples who could not watch in prayer with Jesus for an hour, I too easily stop persevering in prayer about such Kingdom matters.

I do believe I am called to serve in an equipping role within the Church, so that means I should and will spend time with believers, yet that doesn't mean I should live exclusively within the Christian bubble.

Weaker believers may need to spend more time in the bubble, but as one grows in Christ, they should be strengthened so they can move out, but we must always be diligent and wise as serpents.

Let us ask God to give us His heart for lost sheep and His Spirit to empower us to be His witnesses. We often jump ahead to Acts 2:4b and beyond but overlook the preparatory work God was doing in Acts 1:1-2:4a....only after the Spirit comes do we see the disciples witnessing with power and authority and boldness...we can't expect to do God's Kingdom work without God's Kingdom power.