Coming Out of the Complementarian Closet 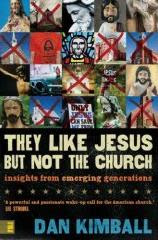 I’m still reading Dan Kimball’s They Like Jesus But not the Church. I know, I know, and I hear you: “Andrew, haven’t you been reading that book for well over a month? Isn’t it an easy read and relatively short? I mean, if it takes you this long to read Kimball, how in the world are you almost finishing a Master’s Degree? And hasn’t Norm finished at least two books of considerable more substance while juggling a ministry job and a wife and child since you began that simple work? Surely your vision is fading or you have developed narcolepsy since beginning it, for how else could I possibly explain your literary sluggishness?”

Look, I’m just a slow reader, so get off my back.

In any case, Kimball is still challenging my thinking on nearly every topic that he writes about. If you’re willing to overlook the sloppy style there is much to be gained, and while still unfinished I give it my hearty recommendation.

One of those aforementioned provocative topics is the church’s view of women as perceived by the outside world (ch. 7). Obviously this is particularly relevant to us complementarians. As one who has been interacting consistently with other Christians almost exclusively (until what will hopefully continue to be my liberation from that subculture), the issue of emerging non-believers’ perception of our treatment of women has never been that practically relevant.

But once again, Kimball has forced me to consider something I otherwise would not have. Indeed, how do emerging (i.e. 18-30 year old) non-Christians perceive the church’s treatment of women? This question becomes especially interesting when we note Kimball’s semi-paradoxical claims that emerging generations tend to gladly see significant differences between male and female as beautiful and God-given, yet see the church as oppressing women. Is this inconsistent thinking by those non-Christians, or is it a case of disjunction between Christian practice and theology (i.e. are we really oppressing women)?

For now I will leave aside the important issue that non-Christians frankly are not supposed to love us. Jesus went to the cross for his claims and said that we servants would not escape the master’s fate. This is one of those issues that some just won’t understand: yes, I do see functional differences between males and females including a God-given hierarchy of authority. Sorry if you don’t like that.

But this truth should never excuse us from thoughtfulness. Kimball offers a challenge that I pass on to you, dear reader: if you are a complementarian, how well can you defend that belief? Why do women not wear head-coverings? Why are they not silent in the churches? If we cannot answer these questions with real thoughtfulness, we should not such strong opinions. The normative relationship between males and females is too provocative of a cultural question (both to Christians and non-Christians) for us to not have thought seriously about. Some might not like your answer no matter how thoughtful about it you are. That much is ok. But we must think about it well.
By Andrew Faris

A lot of the discussions on the topic of how "we" should treat women in the church are from a man's point-of-view. In other words, "how should we (men) treat them (women) in the church". The subtle backdrop of that question is that "we" have all the power.

But how do "they" (women) think "they" should be treated in the church? I don't believe for a second that "they" (women) are waiting for "us" (men) to figure this out and decide. "They" read scripture too, don't they? They have brains and experiences and perspectives that seemingly don't often get invited into the center of these conversations "we" are having about "them".

The thing I like most about Dan Kimball's book is that he is willing to listen. Are "we"?

Thanks Bill, I feel validated by your comment. I find myself very selectively conversing with other people in the matter of "Women in the Church". No judgement made, this is me and the way I feel not a commentary or bashing. Just my heart on this issue

I agree, the world will not really understand the ways of church and the treatment of each other, not just of women. The "Church" is accused all the time of inconsistencies and mistreatments of races, religions, and societal groups, not just gender. However, the question I would pose would be in regards towards the inconsistencies the church's actions show. Women can be directors but not pastors even though the "director" role taken over by a man would seamlessly be transitioned to a "pastor" role. Are we then arguing about a title and if so, I as a woman really could care less, but as your post commented on, what does this say those looking in from the outside.

Should I take the braid out of my hair and my gold earrings out? (I know I know, Historical context and the argument.. but how then can we choose one portion of passage to directly correlate to our society today while writing the next couple verses off in the name of historical context? I see this as a very large inconsistency.

What about Deborah who was a prophetess, the leader of Israel, and a wife all at the same time? And yes, I just read an article that argued that this is Old testament and that it is now the new Covenant we follow as found in the New testament. But what then is to be said about scripture of the NT such as Galatians 3:28 "male nor female".

maybe my questions posed are basic or you read my post with my assumed state of "emotional weakness" forever attached to my womanly being. I do assert that there are certain "giftings" (I'll say that instead of "roles") that men and woman obviously attain. However, if these directly correlate to outside roles such as roles in the workplace we must assume that if one is to say that woman can not assume certain roles in church ministry then they can not take on authority roles such as a CEO of a public business.

You can find me in the closet, thoughtfully thinking and reading.

Andrew - It comforts me that you are willing to talk about these issues in a more rational way. In Grudem's Systematic Theology, when it comes to women keeping silent in the churches, he says something like, "Well obviously we cannot take that statement just as Paul said it...that's not what he means..."
As soon as I read that, I was thinking, "what the heck, why couldn't that be what he was meaning...for that time, in that context?!"
But the fact that Grudem can't just say, hey, this makes no sense, really makes me angry sometimes. Because on the other hand, we have Dr. Pierce who is a fierce egalitarian. These two men are smart guys! Pierce even coming from a very conservative complementarian side of things. And I am a smart girl. I have read a lot about this, and taken Biblical Interpretation with the man - Walt Russell. Why is this issue still so confusing for me (and so many others) then?

I just don't know where to stand on this issue, but I HATE, hate, hate that non-Christians look at Christianity as being oppressive to women.

Personally, I live with a mindset of a complementarian because I just believe that the way that God set up marriage clearly shows us "soft-complementarianism". At my church, I have no problem submitting to any man on our staff or on our board, because I do trust them, and I do know that they listen to me, and value my opinion. I have many opportunities at my church. I sit on the missions board (which is made up of all men and myself), and though that was awkward at first, they treat me with much respect. I sit on the women's board, and help make decisions for that ministry while teaching. Anyway, I could go on, but my point is that, I feel very respected as a women, and as an employee at my church. The only difference is that I don't think I would ever be recognized as a "pastor" (which would be nice for the tax cuts) ;) ...and is that okay? Not only for me, but for other women who direct Children's ministries, family ministries, women's ministries, and missions ministries. I look at Timothy and even though he is instructing men how to run their households, as a single women, I am adamant about finding a husband who will lead us into that, because I do consider myself a "full-time minister of the gospel", and I believe that our marriage and the way we raise our kids should be able to stand scrutiny.

Anyway, my main point, just as you have said Andrew, and your father as well, women want to be listened too. And yes, we are sick and tired of all the men in the world telling us what we need to be, as we watch time and time again, certain men in church leadership mess up. What about what the men need to do. I loved JT links to the 9Marks the other day - How pastors can love their wives and families - it was a great article. My favorite one was, when you come home from work, prepare your mind to serve, and not TO BE served.

Alright, I am officially rambling.

I am enjoying the book as well, though I do not like his writing style...he has some good stuff to say.