Barth on the Cross 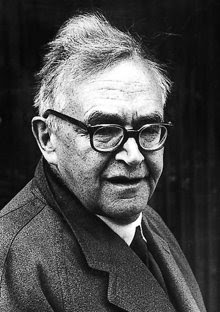 I haven't read much Barth, but Jason Goroncy has, and here's a quotation I dug up that he posted a while back. I found this quote breathtaking.

Jesus Christ, in His solidarity with “human nature which has sinned could pay the penalty of sin” (Heid. Catech. Qu. 16), and at the same time, in the power of His divinity, could “bear the burden of the wrath of God in His humanity” (17). Without any diminution of His divine majesty, in the exercise of the divine majesty of His love He could enter into this “likeness of sinful flesh” to bear, in the same majesty, the judgment of divine wrath without annihilation, to be and to reveal Himself supremely as divine majesty even in His humiliation, to rise from the dead as conqueror of the judgment to which He had subjected Himself, the first fruits of all who were to follow in His steps. He could drink the cup which had to be drunk. Because He was God Himself, He could subject Himself to the severity of God. And because He was God Himself He did not have to succumb to the severity of God. God had to be severe to be true to Himself in His encounter with man, and thus to be true also to man. God’s wrath had to be revealed against the ungodliness and unrighteousness of men. But only God could carry through this necessary revelation of His righteousness without involving an end of all things. Only God Himself could bear the wrath of God. Only God’s mercy was capable of bearing the pain to which the creature existing in opposition to Him is subject. Only God’s mercy could so feel this pain as to take it into the very heart of His being. And only God’s mercy was strong enough not to be annihilated by this pain. And this that could happen only by the divine mercy is just what did happen on the cross of Golgotha: that double proof of omnipotence in which God did not abate the demands of His righteousness but showed Himself equal to His own wrath; on the one hand by submitting to it and on the other by not being consumed by it. In virtue of this omnipotence God’s mercy could be at one and the same time the deepest and sincerest pity and inflexible and impassible divine strength. He could yield to His own inexorable righteousness and by this very surrender maintain Himself as God. He could reveal Himself at once as the One who as the servant of all bore the punishment of death which we had deserved, and the One who as the Lord of all took from death its power and for ever vanquished and destroyed it. In this twofold sense God’s righteousness triumphed in the death of Jesus Christ. (Church Dogmatics II/1, 400)
By Anonymous

My favorite line, "That double proof of omnipotence in which God did not abate the demands of His righteousness but showed Himself equal to His own wrath; on the one hand by submitting to it and on the other by not being consumed by it."

Yeah, I like that part a lot as well. The quote definitely gives some food for thought when reading Romans 3:21-26.