Hot and Cold: some thoughts on my journey through atheism... 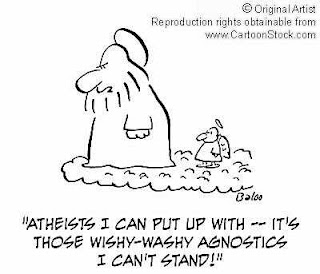 About the same time my brother Chris came to know the Lord in 1999, I declared myself to be an atheist. Incidentally, no one really saw my desertion from God as a shock, mainly because of my lifestyle during those times (which I will come back to in a moment). But my main reason for beginning to abandon my Catholic upbringing had to do with my brother getting saved. His influence and radical transformation had a big impact. I used to say to friends and family, "Well, if there is an Christian out there, my brother is one of them and I am not." So in the beginning of my journey I stopped pretending to be something I wasn't. To my credit, then, at least I was honest enough to be honest.

As this happened, things began to erupt in my family. The two closets brothers (of 3) met each other at polar opposite with respect to their religious beliefs, something that became a major burden to everyone we knew. On the one hand Chris was preaching Christ crucified, and on the other, I publicized the notion of a Godless world. Now the negative implication were major battles of belief and disbelief; dissension grew enormously between my brother and I. But in the positive, it forced my mother and other brother (along with my grandparents and absent father) to wrestle with the question of life and death. I said above that I was raised Catholic. In my home there was no real ethics to deal with, only that which was approved by the family and the local community. And if you did do something slightly more heinous, then the occasional trip to church and the confessional took care of the ol' conscience as well as societal perception. Which goes to show that religion in my family was more apart of our heritage than anything else. But when Chris and I went to both extremes, it compelled everyone to evaluate their own perception of the meaning of life and eternity.

Now, I by no means thought critically about the scientific or philosophical arguments against Christianity, only the ramifications of a life without God. Which ultimately I was using as a conscience buffer to substantiate my lascivious lifestyle. And as bad as this was, God used it as a tool to bring my subsequent family member to Christ. Allowing them to consider how and why a godless person in the truest sense could or would be saved. You can imagine the reaction; it made everyone consider it even more.

The reason I'm sharing this is to encourage our readers of the impact that each one of you have, that you may or may not be aware of. We all have unbelieving friends and family members and whether you know it or not, when you let your (His) light shine, it does make a difference. Sometimes in the beginning it may seem bad, like in the case with me. But consider my testimony, or more importantly, think about what God did for Saul of Tarsus (the Apostle Paul)...

I pray that each one of us would not grow faint of heart, but that we trust in the sovereignty of God in salvation praying each day for the lost souls of our friends and families.