ARE YOU SCARED OF THE LIGHT?

One of the privileges God has given me has been to be a father of three beautiful daughters, Olivia (5), Sienna (3), and Ava (newborn). I have been watching them grow ever so quickly and cannot begin to describe how the experience has changed me for the better. However one of the challenges I’ve found has been how to teach them about Jesus and the Gospel. It might sound simple, but really its not. Sure they say they love Jesus, but they might just be giving me lip service since I and my wife also happen to be their heroes. I think the biggest fret of every [concerned Christian] parent is how to impart the truth to our kids. Well I can say that R.C. Sproul and Reformation Trust have given us an excellent tool in helping us achieve this very goal. 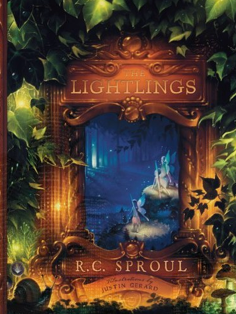 The title of this blog is the basic premise of the book. We all know that kids are scared of dark in one sense or another, so Sproul used this principle to introduce the truth about the Fall of mankind. The book begins with a little boy asking his mother why people are scared of the dark. Though his mother politely jettisons the question and entrusts it to the child’s grandfather, who then proceeds to tell the child a fable. He begins by turning the question upside down by telling his grandson that people are actually more afraid of the light, than the dark.

This is where Sproul gets creative. He draws many truth parallels and makes them accessible and understandable to young children. I’ll try to identify some of them here. The story is about a race of small cute creatures called Lightlings (mankind) who live in a forest with their King (God), who gave them light. One day some of the Lightlings decide they don’t want to do what the King says (rebel), so they leave started off on their own and began walking away from him (their source). As they began to walk further and further away, the light which came from their King became dimmer and dimmer. He then took it completely away resulting in nearly utter darkness (the giving over to vain speculations). The Lightlings are forced to literally feel their way through the forest as they could no longer see where they were going. They proceeded tripped over one another as they stumbled in their journey (life). But their King didn’t want to leave them in the dark so he gave them a gift that would help spread the light throughout the forest, a special bright baby Lightling, who was the Son of the King of Light (Jesus). The light that came from the baby Lightling was far off in the distance (our search for meaning), so many of the other Lightlings travelled far and wide to find the light. Once they saw the baby Lightling, they too became as bright as he was (conversion) so they went home to tell all of their friends and family (evangelism).

The story then goes back to the child and his grandfather, who concludes the story. Like all good storytellers the grandfather explains the meaning of the story to the child. Obviously Sproul placed that in there to allow for the story to explain itself, a very helpful instrument.

As you can see, Sproul's imagination is nothing short of tremendous. Though the first time I read this to my kids they weren’t completely enthralled (they are a little young). But as soon as they learned the story after reading it to them a few times, they just ate it up. Questions arose all over the place from my 5 year old; she even asked me if the baby was Jesus before the story was done (to which I was very proud!). Needless to say, if my kids loved it, I’m sure yours would likewise.

My analysis: I agree with one Amazon reviewer who said, “I particularly enjoyed the simplicity of this allegory.” Since 2003 there have been many Christian children’s books which I have gone through to teach my kids about Jesus. I’ve never read a children’s book that so clearly illustrates drama of creation, fall, and redemption to kids. I would recommend every parent this book to help guide their kids understanding of the truth of Christ. Though the intended age group is between 4-8, my 3 year old simply loves it!
By Damian Romano