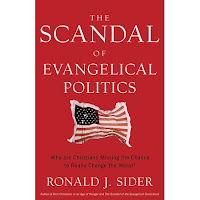 (We Continue our discussion and review of Ronald J. Sider's new book, The Scandal of Evangelical Politics (Baker, 2008))...

The title of Sider's book gave me the idea that the whole book was devoted to indicting Evangelicals for their political programme, or the lack thereof. Instead, after thrashing us evangelicals in ch. 1, he moves right into a constructive proposal for political engagement in ch. 2. The title of the ch. is "Developing a Faithful Methodology."

First Sider gives us a very brief rundown on the history of Christian political engagement from the time of Acts up to the present. He briefly glosses over the pre-Constantinian period, when Christian political involvement amounted to refusing to say "Caesar is Lord." Then he highlights five key political viewpoints of the post-Constantinian age:
Sider quickly moves from this survey into what he proposes for a methodology for evangelical politics.
First, we must embrace pluralism. That is, we must accept that ours is a pluralistic society; the old ideas from Christendom won't work, or at least not in the same way.
Second, we must have a chastened view of natural law. The disparity in political ideas in our postmodern culture should make us realize that human reason is not sufficient for everyone to come to united views on politics, let alone anything else. Nonetheless, we do maintain that people have the image of God imprinted on them and they have the law written on their hearts (Rom 2:14-15). The situation is not as bad as some postmoderns would have us believe. It is like this: we aren't unaware of natural law because we're fallen, instead we twist natural law because we are fallen (cf. Rom 1:21, 28).
Third, our political philosophy must be drawn primarily from Scripture but articulated in the language of pluralism. We should, Sider says, go to Scripture for our stand on politics, but articulate our stand not in "Thus saith the Lord" terms, but rather in the language of the society and in terms they know and accept. It seems like Sider is saying that our political positions should be derived from Scripture but not argued from Scripture. He isn't completely clear.

One last thing Sider says that I think is helpful: our political positions must be more than just biblical proof-texting. We have to labor, not as individuals, but as churches and as evangelicals, and, presumably, as para-church political organizations, to come to systematic reflections on politics. We have to come to a coherent, definitive position on politics. Sider is quick to note that this position must be very humble and open to revision because we are all finite creatures.

I'm looking forward to chapter 3 when Sider surveys Scripture to lay the groundwork for a working political philosophy. It should be good.