Book Review: Why We're Not Emergent 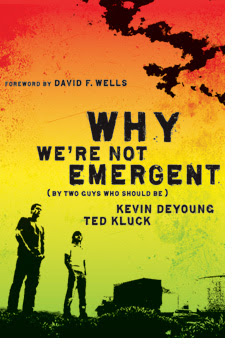 Kevin DeYoung (a pastor, preacher, and writer) and Ted Kluck (a writer) have picked up the ball that D.A. Carson dropped. Most folks paying attention for the last few years will remember well Carson's book Becoming Conversant With the Emerging Church. Although Carson has a brilliant mind, his book critiquing the whole emerging movement suffered for a few reasons:

1. Carson focused too narrowly on Brian McLaren.
2. Carson was "mean." (A common objection to almost anything that critiques the emerging movement)
3. Carson's book was not entirely accessible or readable for the "average joe".
4. The generational gap left Carson without street-cred; he was seen as an institutional guy, defending his place in the institution.

Well, this new book, Why We're Not Emergent (By Two Guys Who Should Be) (Moody Publishers, April 1st, 2008), aims to do what Carson failed to do (ie, to air some serious objections to the theology of the emerging/emergent church). Moody has tried to shore up the weaknesses of Carson's book:

1. The net has been cast much wider; the book engages substantively with Brian McLaren, Tony Jones, Steve Chalke, Doug Pagitt, Peter Rollins, Spencer Burke, etc). DeYoung, a pastor of a medium-sized Reformed Church in East Lansing, Michigan, is actually pretty conversant with these authors, whereas Carson seemed to have just speed-read through McLaren a few hours before pounding out his little book. Evangelicals have no reason to be embarrassed about DeYoung's ability to converse with the heavy-hitters in the emerging movement.

2. DeYoung and Kluck do a pretty good job of not being too "mean." DeYoung, I'd say, won't be open to these charges at all. He avoids vapid rhetoric and instead goes to work synthesizing emerging thought and collating portions of their writing. The tenor of his writing is very charitable, although he is sometimes devastating just by presenting the material that he does. Kluck also does a pretty good job, but sometimes veers off into what seems like mockery of those within the movement.

3. Since neither DeYoung (who holds and M.Div) or Kluck (who is theologically uneducated and is a sportswriter) are academics, the book remains very readable. Moody did something kind of interesting with this book by having the authors alternate chapters. Their styles are so disparate that the contrast can be jarring at points. DeYoung is linear and argumentative and at times seems more like an archivist who is simply collating quotes from the movers and shakers in the emerging movement. Kluck, on the other hand, seems to be going for a Donald Miller type of vibe; he tells some kind of random stories and doesn't tell us explicitly how they relate to his topic. It seems like Moody was definitely trying to milk Kluck for the "cool factor." He was cool at times and not so cool at others. All around, the book's readability factor ranks high.

4. DeYoung and Kluck are young guys (late 20's I believe) and so they can say that they are "two guys who should be [emergent]." This is supposed to give them some sort of street-cred. Whether or not it does remains to be seen.

Brief Assessment: I actually didn't think I would like the book; I don't usually like it when we define ourselves in negative terms (kind of ironic, since I'm a Protestant!). The cover also made me think that someone was going to be trying way too hard to 'hip' and 'cool' throughout the book. I also didn't want to write too positive of a review because this would only bolster my rabidly conservative credentials and cut me off from discussion with emergent/emerging folks, a discussion which was one of the reasons I started blogging! I mean, a positive review of this book would be just too easy to see coming.

Alas, I can't help it. Kevin DeYoung did a great job in this book. I would and will recommend it to people who are trying to learn about the emerging movement. It is a valuable resource simply for the collation of the different portions of writings from the various emerging authors. A lot of the stuff from the book was old-hat to me; I'm relatively familiar with Tony Jones and Brian McLaren. However, I was pleased to learn more about the writings and perspectives of guys like Spencer Burke and Peter Rollins. Many Christians who may only notice superficial and linguistic differences between traditional Christianity and that of "The New Christians" will do well to at least read this book and understand a little bit of the philosophical and theological underpinnings of the movement. (This kind of semi-even-handed, thoughtful analysis is unavailable in the so-called discernment blogs of the likes of Roger Oakland and Ken Silva who make blanket statements and often don't know what they are talking about at all).

Anticipating Reactions:
From Emergent-types: It is really hard to say. I was quite impressed with Tony Jones' willingness to engage in some of the criticism of him that I offered late last week. Perhaps this is a harbinger of more substantial responses in the future. My thought, though, is that by-and-large we will not see many responses that deal with the substance of the objections raised in the book. The reason is two-fold: 1) Our suspicions were correct: if you're like me, you keep saying to yourself about some of these guys (or girls) "he can't mean what I think he means, right?" Well, it is becoming increasingly clear that these folks do actually mean the very unorthodox and un-Christian things they are saying. And, 2) There is too much here to respond to. The sheer amount of the objections raised in the book will allow everyone to be effectively off-the-hook. There is no certain person or issue that comes into focus here, so we probably won't see any large response.

From Conservatives: Two thoughts: 1) those who read the book will like it, but many will be ambivalent about it because the topic is tired. 2) the book is just another contributor to the lines that are already being drawn in the sand. Although the book is charitable, it makes it clear that the issues at stake here are not candles and finger painting and cussing (contra Al Mohler). Rather, the issues here are deep issues about the knowability of God, the sufficiency of Scripture, hermeneutics, epistemology, ethics, revelation, and pretty much every other theological topic you can think of. If there is one thing the emerging/emergent church is doing it is polarizing. Those who aren't following the leader down the emerging path are beginning to run far, far in the other direction.
By Matt Wilcoxen

To be fair, you have to realize that McClaren was the only name really associated with the Emergent heresy that anyone knew of when Carson wrote his book. And the assertion that Carson was "mean" is just ludicrous. You use language that the Emergents use to describe Carson as defending his own position or answering too quickly when the Emergents don't seem to want a solid, quick answer even when there is one. If "mean" simply means that he disagreed wholeheartedly and pointed out the terrible flaws with the Emergent heresy, then count me in. I, too, want to be "mean."

Essentially I was just trying to write a balanced and fair endorsement of the book, without slamming anyone with empty rhetoric or gushing about a book just because I like their conclusions. I hope this didn't bother you too much!

We are interested in really conversing withe some of these people and their ideas, rather than rejecting them out-of-hand. That doesn't mean we are afraid to draw some lines. You should look at the rest of my posts. :)